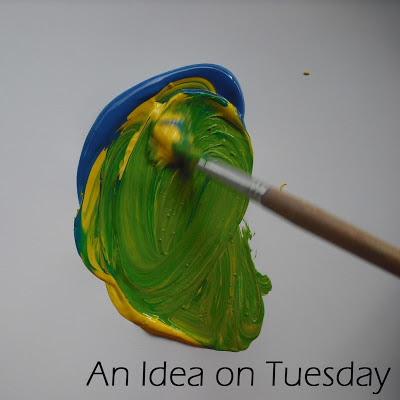 At the moment we are talking about colours in class. We have been wearing the colour of the day, eating food of the corresponding colour (black proved to be impossible!) and enjoying lots of colour learning experiences.

As we immerse ourselves in each primary colour I have been extending the activities to introduce colour mixing. I love hearing the squeals of excitement when the children discover the colour they have created! We tried to use different painting utensils for each experiment and still need to mix black and white paint tomorrow... 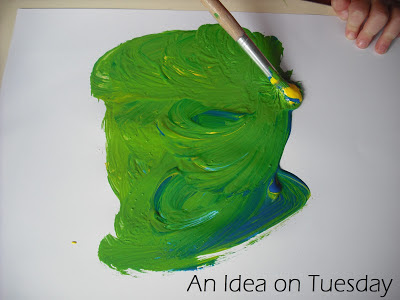 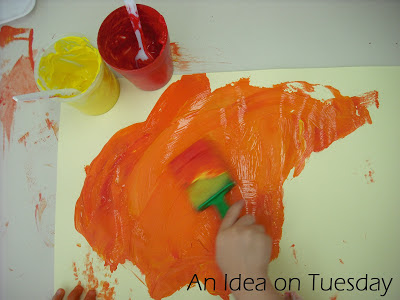 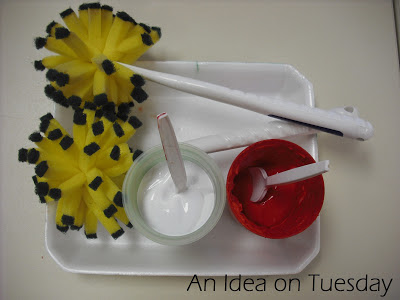 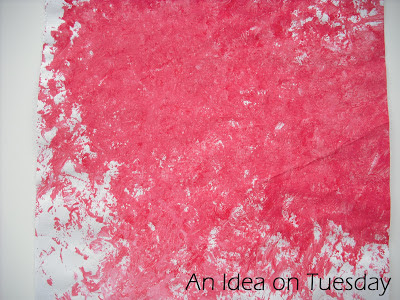 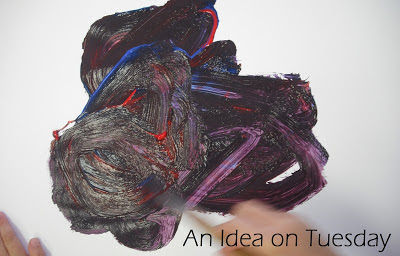 Learning to Use Scissors 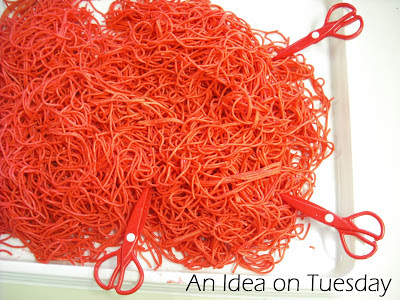 Before I give my class of three year old children scissors to cut paper, I try to give them many different and fun fine motor learning experiences. I like to give them plastic scissors (Which are not sharp!) so they can learn to hold the scissors correctly and build up strength and confidence with handling the scissors correctly.
We mixed the paint into the spaghetti with our hands and then cut it into small pieces with the scissors. Great red fun!! 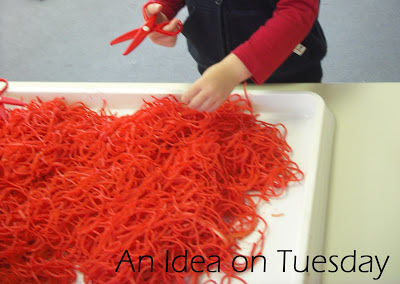 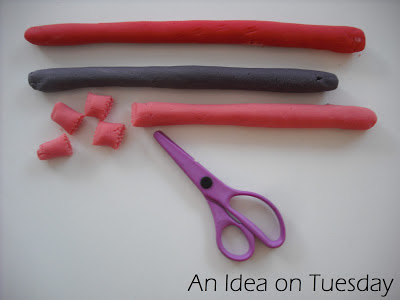 Cutting playdough
I encourage the children to roll long sausages out of playdough and then cut the playdough into small parts. We often extend this activity by counting the playdough pieces and comparing the length. 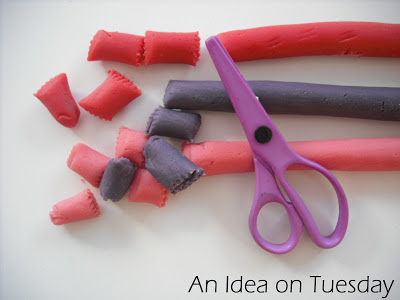 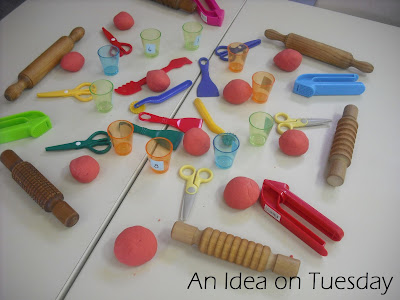 After cutting playdough and spaghetti we will move on to snipping strips of paper. 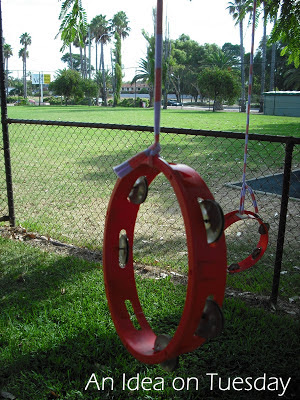 Musical Tree:
I often put musical instruments outside for the children to experiment with and to make as much noise as they like, which always proves to be a noisy and valuable learning experience. This time however, I thought I would hang various tambourines and bells from the branches of a tree at various heights. The children used wooden spoons, cardboard cylinders and their hands to make our musical tree sing! I hung some instruments quite high so that even the tallest 3 years old needed to jump to ring the bells! 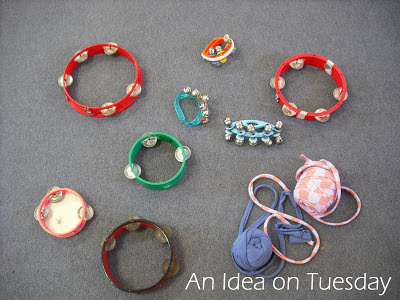 Some of the instruments used to hang from the tree branches. 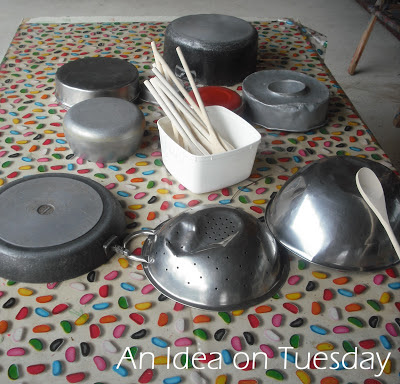 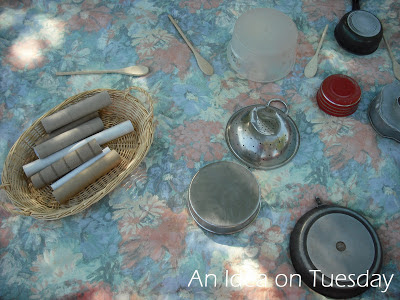 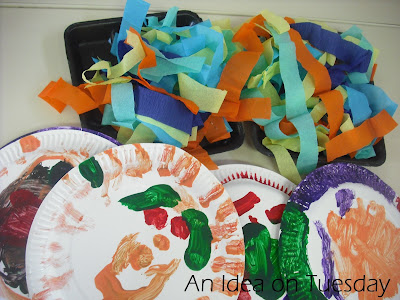 The children painted paper plates with patterns and pictures and set them to dry. I folded the plate in half and stapled around the bottom. The children filled their shakers with a variety of pasta and beans (A great fine motor activity). I then stapled the top of the shaker closed and attached some streamers. 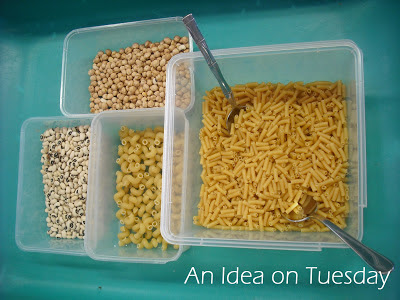 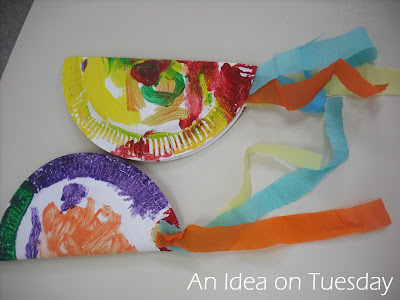 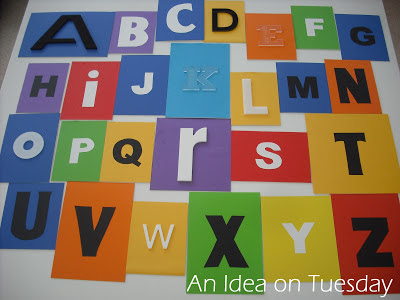 I created this alphabet chart by putting together an eclectic collection of letters - different fonts, sizes, colours and various materials. Some of the letters are perspex 3D shapes that I picked up at a recycling supplier along with the cardboard. We have this hanging in the writing area in our classroom but would also be great in a child's playroom or bedroom. 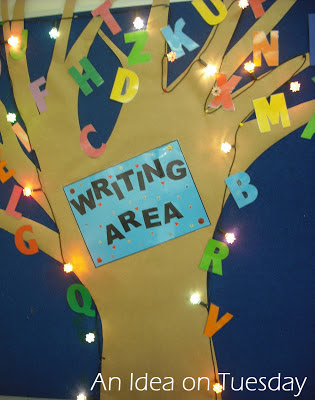 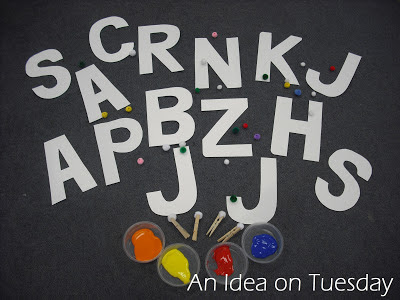 Identifying and decorating the first letter of their name using pompoms and pegs.
We wrote the rest of their name and attached to their initial and displayed in the classroom. 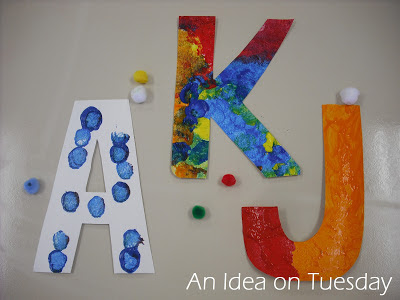 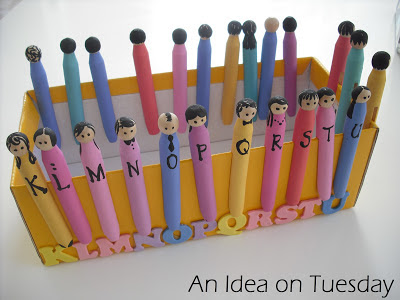 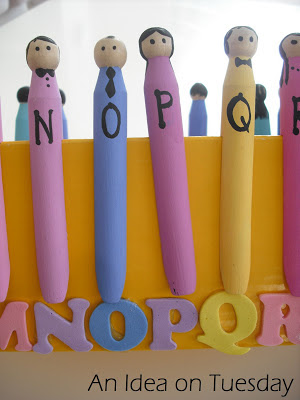 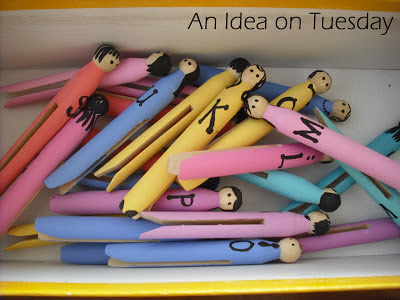